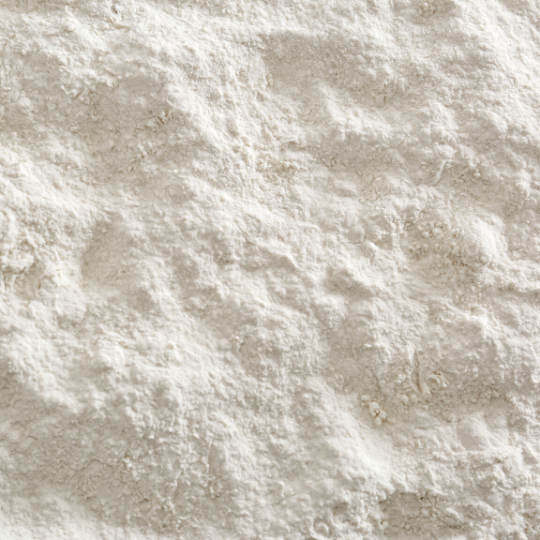 Gluten is a structural protein naturally found in certain cereal grains. Wheat gluten is composed of mainly two types of proteins: the glutenins and the gliadins. Gluten forms when glutenin molecules cross-link via disulfide bonds to form a submicroscopic network attached to gliadin, which contributes viscosity (thickness) and extensibility to the mix. If this dough is leavened with yeast, fermentation produces carbon dioxide bubbles, which, trapped by the gluten network, cause the dough to rise. Baking coagulates the gluten, which, along with starch, stabilizes the shape of the final product. Gluten content has been implicated as a factor in the staling of bread, possibly because it binds water through hydration. This flour-like powder, when added to ordinary flour dough, may help improve the dough's ability to increase in volume. The resulting mixture also increases the bread's structural stability and chewiness. Gluten-added dough must be worked vigorously to induce it to rise to its full capacity; an automatic bread machine or food processor may be required for high-gluten kneading.